I’ve ever wanted to visit Warsaw, the capital of Poland, as I have been to Poland before and everyone told me it’s one of the most interesting cities of the country. That is why I booked a trip together with my brother to see what the city is all about and if it really is that cool and interesting.
We took an afternoon flight with Wizzair which was really cheap, they did their job and we even were able to book a cheap transfer into the city center (return flight Dortmund – Warsaw including Transfer to and from the main station was about 45 EUR per Person only).
As the weather was good and we wanted to have a first impression of the city we walked the 3.5 km way to our hotel, the Ibis Budget Warsaw City Center (on Tripadvisor).
First thing you see is the skyline of the city with the famous landmark, the Palace of Culture and Science, a Soviet built high-rise building which is quite impressive, even if there are more modern sky scrapers around.

First thing we did was having a meal in the modern Zlote Tarasy mall which is right next to the main station and is inside an eye-catching glass construction. A lot of shops are inside, so if you like shopping, you shouldn’t miss this place.
So after our meal in the food court (nothing local yet) we took the walk to our hotel and had a great first impression of the city. Even if there is lots of traffic, there are many parks in the city which are quite extensive also and there are also some recreational areas at the Wisla River which flows through the city. Many buildings are quite modern, older buildings have been refurbished as many where demolished during World War II here.
As we had an afternoon flight, the first day wasn’t a sightseeing day. After check-in at the hotel we noticed that there was a small “beach bar” right opposite of the hotel at the river. We decided to have our first drink here after a small break at the hotel. No sooner said than done, we walked over to the bar about half an hour later to check out what was on here. We sat down with a good Polish beer enjoyed the good weather and really had a good start here. As it was Saturday we decided to do some bar hopping and clubbing and had a really good night. There are many bars and clubs in the city, the drinks are not too expensive if you compare it to Germany and the people are really friendly. That night we went to several bars around the Nowy Swiat and the Sketch Nite Club, we had a great time and can really recommend Warsaw for partying, there are a lot of interesting backstreet bars which are open on weekends and the old buildings in the city center are also home to cool clubs.

The next day started at half past twelve when the cleaning staff woke us up as they wanted to make up our room. We missed the paid breakfast by about two hours (shit happens) and went straight out to KFC for a hangover breakfast after taking a shower. As this already was enough for us to be ready for some sightseeing, we started to explore the city center.
After we only visited the food court the day before we decided to check out the stores in the Zlote Tarasy mall. We didn’t buy anything but they actually have a lot of different shops here, mostly international brands.
We walked on to pass the Wedel Building, the original building of the E. Wedel Company, the most famous and largest producer of confectionery in Poland and reached the Tomb of the Unknown Soldier which was built after World War I to remind of the unknown and not identified soldiers which gave their lives for Poland in the wars of the last centuries. It is located on a large square in front of the Saxon Gardens and the Polish National Opera. Interesting is, that it is always guarded by Soldiers. 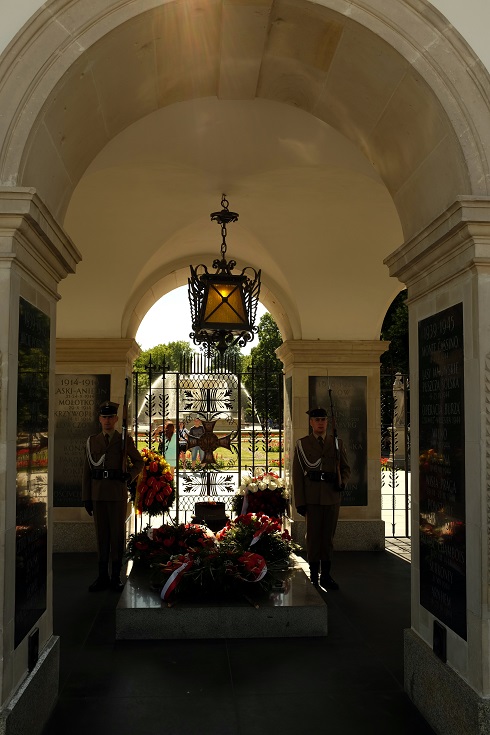 After a break in the Saxon Gardens we walked over to the ulica Krakowskie Przedmiescie where the Presidential Palace and the University of Warsaw are located. It was quite busy here as the weather was great and a lot of people were sitting in the cafés and on the benches enjoying the sun. We had some soft ice cream and walked along the street which leads to the old city. 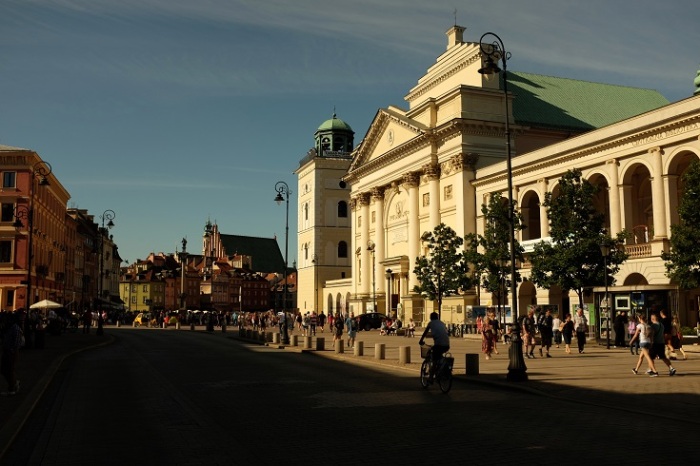 As we already walked a lot today we decided to explore the old town the next day. We passed along the Royal Castle and went down to the Wisla River, which led us back to our hotel.
Later on we decided to have some local food now. As we already saw a restaurant which would was advertising which local food, we thought we need to check it out. It was the “Zapiecek Polskie Pierogarnie” (on Tripadvisor), Pierogi are a traditional Polish dish. We decided for some Pierogi (dumplings) and a pork knuckle with sauerkraut (yes, in Poland they also have some sauerkraut dishes) and really enjoyed it with a homemade lemonade.
As it was Sunday and we already had a long night the day before we decided to go to sleep a little earlier that day.
Indeed we didn’t miss the breakfast the next day, and started strengthened into the day.
Our first stop was the nearby Lazienki Park, a large park, the Royal Bath Park which is home to the Palace on the Water and the Roman Theater. We walked through the park for some time and made a break at the Old Orangerie. This park was really nice, the weather was great and we had a lot of time to check out the different buildings and sights in the park.

After leaving the park at its northern end we walked along different Polish governmental buildings where some people were protesting against the course of action of the current government.
We walked through the nearby parks and the Nowi Swiat street to reach the old city again.
Actually we planned to visit some museums that day, unfortunately most are closed on Mondays, you should remind that while planning a trip here. Luckily we found the Royal Palace to be open, so we visited it. It was really interesting to see the refurbished palace in its old beauty, as it had been demolished and victim to art robbery during different wars in the last centuries. The different rooms inside are in great shape, a lot of paintings and statues have been stored away during World War II so that many of them are in original conditions as they have not been demolished. 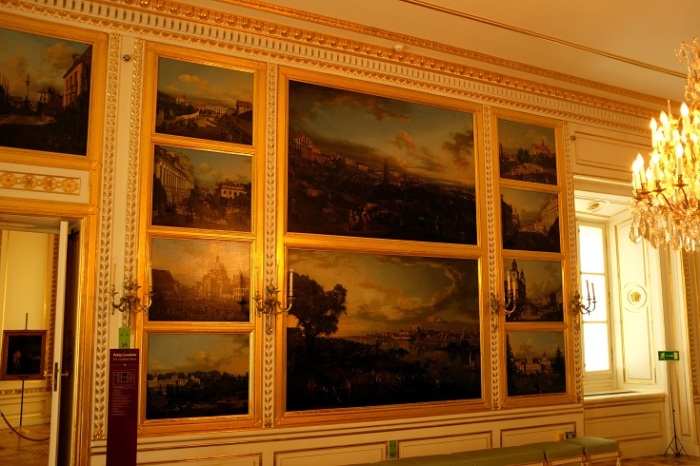 It is interesting to see all the old paintings of Poland as Warsaw as you can see the development of the city in those. After WW II some of these historic paintings have even been used to rebuild the old town to what it looks today as it was possible to identify some of the buildings that were still in better shape.

After the museum we were hungry so we decided to have some more local food and discovered the nearby Karmnik Bar and Restaurant where we had some really good food and lemonade, this time we had another kind of dumplings and meat which also was tasting great (on Tripadvisor).
After the meal we took some time to walk through the old city where we especially liked the Market Square with its great number of cafés and restaurants.

From here we walked over to the Multimedia Fountain Park. As the weather was really good again we sat down and enjoyed the cool air near the fountains before we returned back to the hotel to have break. It was really surprising but we didn’t do a single ride on public transport or taxis within the city, we walked a lot and did everything which is the best way to discover a city I think. You should only be light at your feet 😉

As we had to get up early for our flight back home the next day we decided to end our trip here, had something to eat at a Sphinx Restaurant, a Polish Steak House chain.
Unfortunately we had a flight quite early in the morning, so we walked to the central station in the middle of the night as we were picked up by the transfer driver from there.
Again we had a good flight home on Wizzair and arrived back home with great memories.
We really liked Warsaw as it is possible to visit an interesting city where there is a lot to see and you can also do it with a small budget as hotels and food are cheaper than in Western Europe. One day we will definitely return here to go some more into detail and visit some of the interesting museums in the city.

How to get to Warsaw?
Warsaw has to airports, a large one (Chopin Airport – WAW) which is accessible from almost all over the world and a smaller one (Modlin Airport – WMI) which is a base for the low cost carrier Ryanair only.
You can reach Warsaw Chopin Airport best on direct flights by LOT Polish Airlines which also offer intercontinental connections from North America and Asia. From Europe most large Airlines and low cost carriers such as Lufthansa, Aeroflot, Scandinavian Airlines and Wizzair are flying to Warsaw. If you come in from another continent the connections on Lufthansa (through Frankfurt or Munich), Aeroflot (through Moskow), KLM (through Amsterdam), Emirates (through Dubai) or Finnair (through Helsinki) are some options.
From the European Continent you can also easily reach Warsaw by train, coach or car.

Where to stay?
As all other big cities Warsaw offers a wide range of different accommodations from cheap to expensive hotels, apartments or holiday flats for example. Best option is to visit a meta searcher like http://www.trivago.com, http://www.discavo.de or http://www.kayak.com to compare prices before booking.

Thank you for reading, we hope we were able to give you some interesting insight into our trip 🙂 As always, you can contact us by commenting below or just dropping an e-mail to thealterlookout@freenet.de in case you have any questions or suggestions. Also don’t forget to follow our Twitter (http://www.twitter.com/thealterlookout ) and Instagram (http://www.instagram.com/thealterlookout ) to be always up to date about our blog posts and to see some pictures even while we are travelling.

This site uses Akismet to reduce spam. Learn how your comment data is processed.